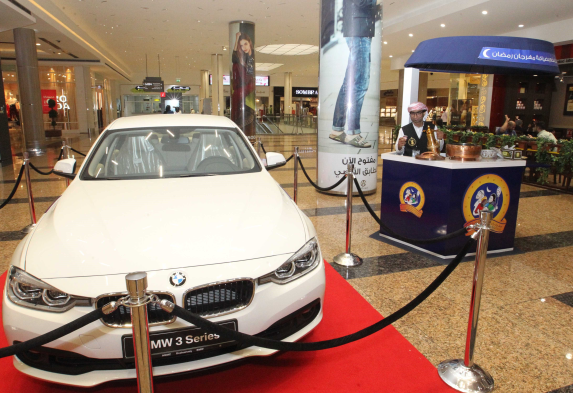 Entering its 3rd week, the Sharjah Ramadan Festival 2018 witnessed a great turnout and enthusiasm from visitors that are looking to enjoy the festival’s various activities, promotional campaigns, and great discounts on various goods and products. The festival, which is in its 29th edition, will continue its events and activities until the 18th of June.

Ibrahim Rashid Al Jarwan, Coordinator of the festival, stated that the festival’s activities have garnered the attention and satisfaction of the public, which is reflected by the massive reaction to the variety of events that are organized by the chamber. He pointed out that shopping malls and retail outlets have intensified their promotions during the last days of Ramadan, in the aim of attracting more shoppers that are looking to take advantage of great deals and promotions.

Expo Centre Sharjah has announced that it has organized a raffle draw for a luxurious BMW or a dream holiday of 3-nights for two with Emirates Airlines in a five-star hotel in Turkey, in addition to other valuable prizes. Winners will be picked during the end of Ramadan Nights 2018, which is being organized by the centre until the last days of Eid al Fitr, with support from the SCCI. City Centre Sharjah will also organize a draw for a GMC Terrain vehicle, in addition to daily gift cards. Meanwhile, Sahara Centre will organize draws for 2 Range Rover Velar vehicles and 4 tourist trips, while Mega Mall will organize draws on a Jaguar F-Pace vehicle and a Jaguar F-Type vehicle, in addition to a raffle for daily vouchers.

Mohammed Sorour, Marketing Manager of Mega Mall Sharjah, remarked that the Sharjah Ramadan Festival is one of the most popular events for visitors and shoppers due to the variety of cultural and entertainment events that are available during its run, and due to the massive promotions that are offered by merchants and outlets during this time. He also expressed his thanks to the Sharjah Chamber of Commerce and Industry for this initiative that aims to revitalize and enhance the emirate’s economy during the month of Ramadan.

Pierre Semaan, Marketing Manager at Sahara Centre, praised Sharjah Chamber’s success in organizing this mega festival which has earned the satisfaction of both merchants and visitors. He added that Sahara Centre has organized many events and activities, which include the raffle draw that gives the centre’s visitors the chance to win 2 Range Rover Velar vehicles and 4 tourist trips, in addition to other events that are expected to be held until the last days of Eid.

Ramadan Nights 2018, one of the most prominent initiatives of the Sharjah Ramadan Festival, offers the largest Ramadan shopping platform in the region. Visitors can find promotions and discounts up to 80% off that feature a wide range of products that includes clothing, food, home electronics, cosmetics and household appliances. The fair has also attracted the participation of 300 exhibitors, which is an increase of 36% over the previous year.

Emirates Airline and the Arabian Gulf Mechanical Centre (AGMC) are participating as official sponsors for the Sharjah Ramadan Festival 2018, which comes as part of the chamber’s framework to build partnerships between the public and private sectors, in order to seek the happiness of the emirate’s community and to foster a spirit of corporate social responsibility, especially during the Year of Zayed.