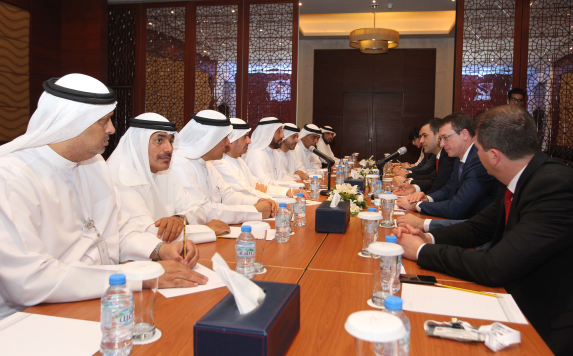 The meeting comes as part of an official visit to the UAE by the Moldovan delegation to highlight new areas of cooperation between both countries, especially since the UAE contains many investment opportunities in various sectors such as metals, pharmaceuticals, renewable energy, tourism, and financial services among others.

The two sides agreed to exchange official visits, hold economic events and exhibitions, facilitate procedures for investors in both countries, provide incentives for Emirati companies to enter the Moldovan market, work to provide the private sector with vital information such as rules, legislation and investment guarantees in both countries, and work to benefit from the attractive investment environment in Moldova in specific sectors such as Infrastructure, agriculture, food industries and information and communication technologies.

The UAE and Moldova signed an agreement on economic and technical cooperation at the beginning of the year, and work is currently underway to establish a Moldovan-UAE joint economic commission as part of the agreement to help boost bilateral economic relations and to act as a platform to discuss the opportunities and challenges that face investors.