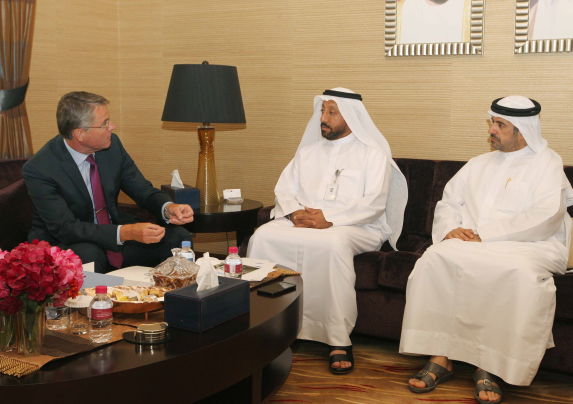 Sharjah Chamber of Commerce and Industry (SCCI) discussed  developing economic cooperation with the German consulate in the Dubai and the possibility of organizing joint economic events in Sharjah and German cities to promote investment opportunities and strengthen communication mechanisms between the two countries' business communities .

This came during a meeting between His Excellency Abdullah Sultan Al Owais, Chairman, and HE Günter Joseph Rauer, Consul General of the Federal Republic of Germany in Dubai and Northern Emirates, in the presence of HE Khalid Bin Butti Al Hajri, Director General.

The meeting was held yesterday at the Chamber's headquarters and discussed a number of issues to promote trade, investment and industrial cooperation between Sharjah and Germany to realize the aspirations of the private sector on each side.

HE Abdullah Al-Owais praised German technology and its contribution to the performance and efficiency of local industries and their impact on the quality of local products and stressed the Chamber’s keenness to provide all the facilities available to drive forward economic cooperation and the organization of joint economic events throughout the year thanks to Sharjah Chamber’s active membership in the UAE Federation of Chambers, the German Emirati Joint Council as well as the Arab-German Chamber of Commerce and Industry.

Al Owais pointed out that the discussions focused on academic cooperation and making use of German expertise in management and supporting small and medium size enterprises in addition to technical training and the possibility of developing a plan of action between the Chamber and the German consulate to build opportunities for cooperation between German academies and their counterparts in Sharjah to prepare qualified human resources with expertise and professionalism and thereby support the labor market in Sharjah.

For his part HE Günter Joseph Rauer stressed his country's interest in enhancing trade relations and mutual investment, developing links  between the private business sectors in Germany and Sharjah and praised Sharjah’s development at various fields, and he expressed the  German Consulate’s keenness and readiness to cooperate with the Chamber to provide opportunities for training and harness German expertise for training human cadres.

It’s remarkable that trade between the UAE and Germany reached about 17 billion dollars (62.5 billion dirhams) in 2016, more than one third of the total German trade with Arab countries thanks in large part to the fact that most machinery and equipment in the factories in the UAE are made in Germany.

According to data from the UAE Ministry of Economy the UAE is Germany's largest trading partner in the region with German investments reaching about 2.8 billion dollars in 2015, and the number of German companies operating in the country reaching 110 companies, 507 commercial agencies and 12,660 registered, all according to 2015 statistics.