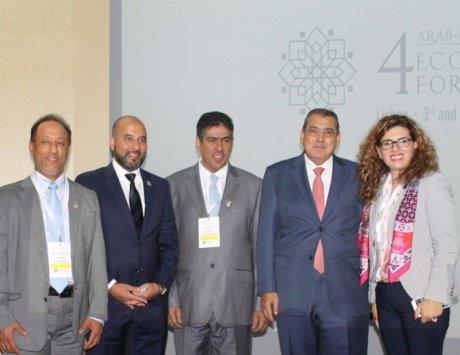 HE Abdullah Sultan Al Owais, Deputy Chairman of the UAE Federation of Chambers of Commerce and Industry, and Chairman of the Sharjah Chamber of Commerce and Industry (SCCI), called on businessmen, entrepreneurs and investors in Sharjah to venture investment opportunities with the Republic of Portugal, during the fourth "Arab-Portuguese Economic Forum", which concluded in Lisbon on Tuesday.

Al-Owais stressed Portugal’s position as a potential market for investment in the European Union, and expressed SCCI’s readiness to provide unhindered support for the private sector in Sharjah. He also promised to work towards facilitating trade exchange and the export of world-class local products to Portuguese markets.

Al-Owais's remarks were on the sidelines of SCCI’s participation in the annual forum. Organized by the Arabic Portuguese Chamber of Commerce and Industry in cooperation with the Arab League, The forum was attended by His Excellency, Dr. Marcelo Rebelo de Sousa, President of the Portuguese Republic.

Al-Owais noted that the SCCI spares no effort in developing bilateral relations with business partners across the world, and works relentlessly to nurture trade and business opportunities between Sharjah and international markets. This comes as Sharjah maintains a highly attractive investment environment,   due to its strategic location, economic infrastructure and its competitive rules and regulations.

Al-Owais highlighted the growing number of Portuguese companies currently established in the UAE, amounting to more than 575 companies, and ranging from technology, and energy to health care and other sectors.

During the two-day forum, high-level discussions took place between Arab and Portuguese delegates, businessmen, and investors, along with members of the Portuguese government.

Talks during the first day tackled growth strategies for the business sector, the advantages of SME’s in the Arab region, and investment opportunities in both the MENA region and Portugal. The discussions also highlighted the importance of Arab - Portuguese relations, paving the way for further cooperation between the participating countries in health care, infrastructure, construction and other sectors.

The second day saw a number of bilateral meetings between the heads of Portuguese and Arab Chambers of Commerce and Industry, representatives from Arab institutions, companies and their Portuguese counterparts.

The value of trade exchange between the UAE and Portugal amounted to 1.23 billion dirhams (300 million euros) in 2015, and both countries are working to double this figure.