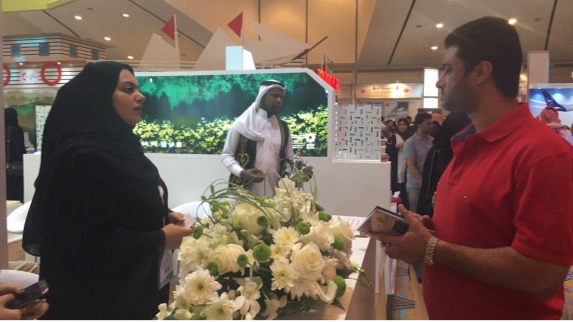 Sharjah Chamber of Commerce and Industry (SCCI) took part in the Riyadh Travel Fair to market the Best 10 Gulf Establishments Award and to introduce Sharjah Award for Economic Excellence and its role in creating a competitive and encouraging environment among the UAE and Gulf business communities.

Nada Al Hajri, General Coordinator of the Sharjah Economic Excellence Award, said that Sharjah Chamber’s participation in the Riyadh Travel Fair, held  10-13 April, comes in cooperation and partnership with the Sharjah Commerce and Tourism Development Authority to make use of Sharjah’s promotion and community service programs.

Al-Hajeri added that promoting the Sharjah Economic Excellence Award is part of the promotional and marketing plan for the award, especially the category for "the Best 10 Gulf Establishments Award", launched two years ago, and the category for the "Sharjah Award for Gulf Nationalization", through a ceremony honoring the winners of the award for 2017, and she pointed out that taking part in the exhibition aims to arrange face-to-face meetings with businessmen and companies participating in the event, to highlight the award and the mechanisms and conditions set for nomination and the benefits and incentives granted to the winning companies.

During the annual awards ceremony held last January, Sharjah Chamber announced the launch of a seventh category in the third GCC-wide edition titled "Sharjah Gulf Nationalization Award", in the context of the ongoing development and updating of the award, to honor companies that most employed national Gulf cadre, in constructive and productive partnership with the Federation of GCC Chambers and in light of the recommendations of the Fifth Gulf Resources Conference, organized by the Sharjah Chamber last October under the theme "Gulf Human Capital ... A promising Wealth".

The 2017 edition of the Sharjah Economic Excellence Award saw the  participation of a number of remarkable Gulf entities in the category of the Best 10 Gulf Establishments in its first year, representing various economic sectors, which is a category that enjoys the Federation of GCC Chambers’ support.

Sharjah Chamber had organized last year a tour to familiarize a number of GCC countries including Saudi Arabia, Oman, Kuwait and the Kingdom of Bahrain with the Award, as part of the promotional phase of the "Best 10 Gulf Establishments", which aims to encourage companies from the private sector and individuals to participate in the Award in order to stimulate creativity in various economic sectors.