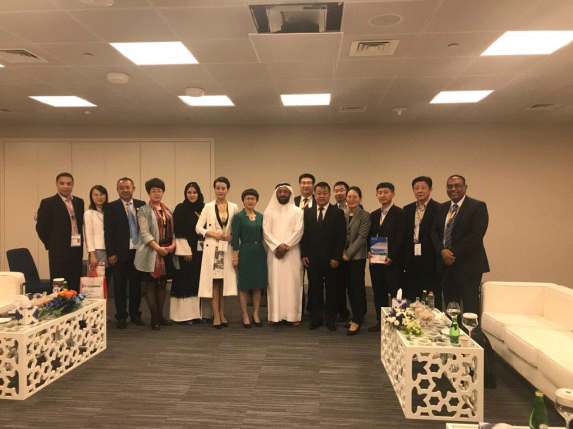 Sharjah Chamber of Commerce and Industry (SCCI) concluded its participation in the 8th edition of the  Annual Investment Meeting 2018 through Sharjah emirate’s pavilion which showcased key services offered by the Chamber, part of its efforts to enhance the role of economic establishments and attract foreign investments, promoting Sharjah's position as an attractive and promising investment destination and a major commercial hub in the region.

HE Abdulla bin Sultan Al Owais, Chairman, said that the Chamber's participation in the Meeting and exhibition came to its importance as  a leading international platform for foreign direct investment and as an annual opportunity for the Chamber to enhance its strategic communication with policy makers and economic and government representatives and business leaders from around the world, to promote investment and introduce the promising and ambitious development projects and attractive features offered by the emirate, including the services and facilities provided to the business community in the emirate.

Al Owais added: "Our participation comes within the framework of the Chamber's 2018 work plan which focuses on international and regional forums and activities in order to build cooperation and partnerships with new parties, exchange information and expertise, promote the outstanding investment environment in the emirate and the great opportunities it enjoys, and introduce the Chamber's services to the business sector in Sharjah. "

Al-Owais discussed with the vice president of the China Council for the Promotion of International Trade (CCPIT) of the Chinese province of Ningxia ways to develop economic cooperation that dates back 20 years, increase trade exchange and promote joint investment between the business community in Sharjah and its counterpart in Ningxia Province. The two sides discussed the joint promotion of economic events held in both Sharjah and the Chinese province, which will allow businessmen and investors from both sides to identify opportunities for investment and build partnerships in order to promote trade exchange between the two countries.

Al-Owais further discussed with the delegation of the Republic of South Korea ways to develop and strengthen economic relations and enhance trade exchange between Sharjah and South Korea. The two sides reviewed the possibility of organizing joint events for businessmen from both countries, which will contribute to introducing investment opportunities and strengthen cooperation and the exchange of experiences to serve the interests of the two sides.

In the same context, Al-Owais met the president of the State Investment Promotion Company of Kazakhstan, where they discussed ways to strengthen trade and mutual investment between Sharjah and Kazakhstan and coordinate efforts to open up more opportunities for economic cooperation, trade exchange and investment projects between the two sides in the framework of friendly relations between the UAE and Kazakhstan.

For his part, HE Waleed Abdulrahman Bukhater, Second Deputy Chairman, held a number of business meetings with several foreign and Arab delegations. HE Hisham Boudraa, Director General of the Moroccan Agency for Investment Development and Freedoun Hartouqa, Secretary General of the Investment Authority in Jordan, in the presence of members of the board of directors HE Ahmed Al Naboodah, HE Ahmed Al Shehhi, HE Nasser Al Tanaiji, and a number of executives from the Department of International Relations in the Chamber, where the two meetings witnessed the introduction of the services provided by each party to their clients and their role in promoting investment and attracting, encouraging and promoting foreign investment and ensuring the sustainability of the attractive investment climate. The meeting focused on promoting mechanism for attracting foreign  investment, creating employment opportunities, integrating into regional and global markets, revitalizing the economic movement, enhancing the investment environment and boosting exports.

During its participation in the international exhibition accompanying the forum Sharjah Chamber received a number of businessmen, investors and representatives of government and private institutions participating in both the forum and the exhibition; participated in a number of workshops to promote investment opportunities in the emirate and to introduce the Chamber's services.

The forum witnessed the participation of dignitaries, official delegations and businessmen from some 140 regional and international countries, while the exhibition attracted more than 250 government-owned companies from 125 countries.