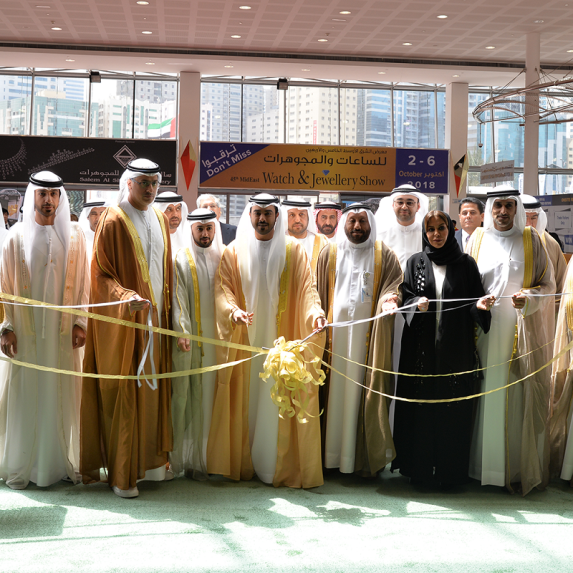 The show was launched under the patronage of His Highness Dr Sheikh Sultan bin Mohammed Al Qasimi, Supreme Council Member and Ruler of Sharjah, and with support from the Sharjah Chamber of Commerce and Industry.

Sheikh Khalid Bin Issam Al Qassimi toured the 30,000-square meter exhibition, which will continue until April 7. The show features the participation of more than 500 brands and companies that specialize in the design and manufacture of watches and jewellery, as well as accessories and ornaments made with gold, diamonds, precious stones, pearls and others.

Sheikh Khalid Bin Issam Al Qassimi also met with a number of exhibitors and officials of the national pavilions that are participating in the event. The current edition of the show features national pavilions from several countries known for manufacturing fine watches and jewellery, which includes India, Hong Kong, Italy, Lebanon, Malaysia, Singapore and Thailand. The exhibition also includes the participation of leading brands and companies from the United Kingdom, Japan, Russia, the United States, Latvia, Lithuania, Saudi Arabia, Pakistan, Jordan, Bahrain, Turkey, Taiwan, Yemen and the UAE.

Sheikh Khalid Bin Issam Al Qassimi was accompanied by HE Abdallah Sultan Al Owais, Chairman of the SCCI; HE Khalid Jasim Al Midfa, Chairman of Sharjah Commerce and Tourism Development Authority (SCTDA), HE Waleed AbdelRahman BuKhatir, Second Vice Chairman of the SCCI; HE Khalid Bin Butti Al Hajri, Director-General of the SCCI; HE Saif Mohammed Al Midfa, CEO of Expo Centre Sharjah; and a number of board members of both the SCCI and Expo Centre Sharjah. The inauguration was also attended by various government officials, diplomats, traders and representatives from the watch and jewellery industry.

During his tour, Sheikh Khalid Bin Issam Al Qassimi viewed modern and traditional designs and innovations of watches and jewellery. He visited the Indian pavilion, which is the show’s largest pavilion that includes 60 companies displaying their latest designs and creations. He also visited the Hong Kong pavilion, which is the second largest pavilion in the exhibition with 58 participating exhibitors, and other pavilions for countries that are known for the manufacturing of watches and jewellery, including Italy, Malaysia, Singapore, Lebanon and Thailand.

After the tour, Sheikh Khalid Bin Issam Al Qassimi praised Expo Centre Sharjah for its ability to organize the MidEast Watch and Jewellery Show twice a year while also successfully maintaining the event’s quality and reputation. He added that attracting more than 500 exhibitors to participate in the 44th edition of the show is an indication of its growing importance for businessmen, investors, traders, experts and representatives from the watch and jewellery industry.

HE Saif Mohammed Al Midfa, CEO of Expo Centre Sharjah, said that the show continues to succeed in increasing its turnout and in attracting brands from around the world. He stated that the success of the exhibition is aided by the strength of the gold market in the UAE, which is considered as one of the most important countries in terms of both gold exports and average per capita consumption of gold. He also welcomed traders and visitors to come and learn about the latest designs and innovations in the field of jewellery and watches.

The event is being held amidst expectations for the global precious stones and jewellery market to record a compound annual growth rate of over 7 percent by 2019, according to a report by TechSci Research.

Meanwhile, the UAE’s luxury goods market is expected to grow from US$3.18 billion in 2004 to US$8.98 billion before the end of the current decade.