Sharjah Chamber Restructures the Representative Committee of the Industrial Sector 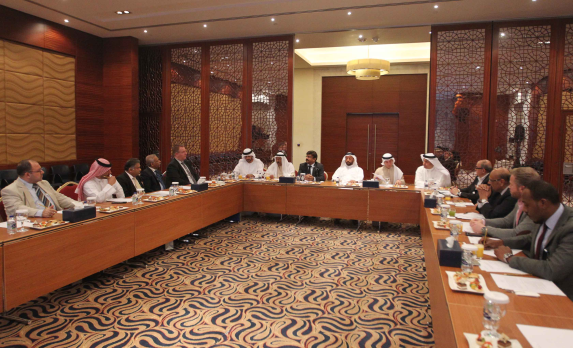 His Excellency Abdullah Sultan Al Owais, Chairman, Sharjah Chamber of Commerce and Industry (SCCI), stressed the industrial sector’s vital role in Sharjah and the industrial products’ prestige, of all categories, in terms of efficiency and quality in the local and foreign markets.

Al Owais noted that the industrial sector in Sharjah has become an effective and influential contributor to the economic development of the country and the sector's products have become a source of pride for in foreign markets, stressing the Chamber’s keenness to continue its efforts to support this vital sector by launching specific initiatives that enhance its position.

Chairman Al Owais praised the industrial sector’s Business Group that is working under the Chamber’s umbrella and the Chamber's endeavor to upgrade this strategic sector to its advanced level.

This came at the first meeting of the representative committee of the Business Group for the Industrial Sector after restructuring, held at the Chamber’s headquarters and attended by HE Abdullah Al Owais, HE Ziad Mahmoud Khairallah, Board member, and with the participation of a number of officials and directors of industrial establishments in Sharjah, and Mohammed Ahmed Amin, Director General Assistant for the Communication and Business Sector, Ibrahim Rashid Al Jarwan, Director of Economic Relations and Marketing department, Yaqoob Yousif Al Qaseer, Industrial Affairs Advisor, and Amgged Awadalkarim Idriss, Head of the Business Groups Section.

During the meeting, the chairman and members of the representative committee of the Group were selected for its new cycle, which witnessed the entry of new members representing various industrial and productive sectors, adding to the Group's future performance and enhancing the sector's role in serving the gross domestic product.

The Chairman welcomed members of the new representative committee and stressed its role in developing the activities of the economic sectors, securing their income, ensuring representation for the largest number of these sectors in the business groups, providing advice and launching initiatives that serve the sector in particular and economic development.

The Chairman explained that the aim for establishing the business groups is to activate continuous communication and positive work between the Chamber and representatives of the economic sectors and to strengthen and support private establishments, study the laws and legislation of interest to each group and provide recommendations.

Al Owais pointed out the importance of the industrial sector’s participation with the trade missions to open new markets, wishing success to all members of the new representative committee for the benefit of both Sharjah and the UAE.

A number of topics related to the development of the local industrial sector and the challenges facing it were discussed in the meeting as well as the business group's work system through a presentation given by the Head of the Business Groups which included an explanation of the organizational structure of the business groups, its objectives,  functions, and the committee member’s specializations and those of the committee’s chairman and his deputy, in addition to the work mechanism for communication between them and the concerned parties.

Lalo Samuel was elected Chairman of the Committee in its new cycle in addition to the committee’s deputy chairman, rapporteur, and its members. Samuel expressed his appreciation for the Chamber's efforts to form business groups that represent the main sectors of the emirate to be their voice, thus supporting the Chamber's efforts to develop each sector’s performance