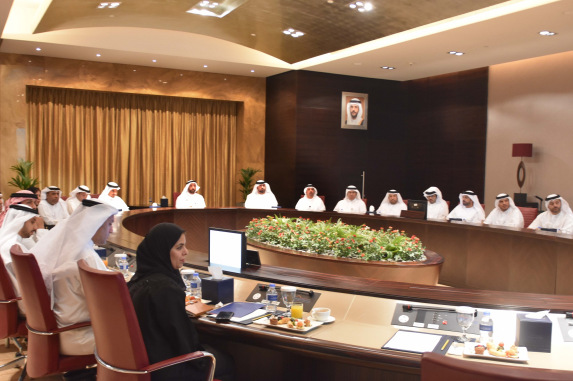 The Board of Directors of Sharjah Chamber of Commerce and Industry (SCCI) thanked His Highness Dr. Sheikh Sultan bin Mohammed Al Qassimi, Member of the Supreme Council and Ruler of Sharjah, for his decision to increase the salaries of UAE nationals working in the Government of Sharjah, reaffirming His Highness’s concern for ensuring prosperity for all national families and motivating them to exert more effort and dedication within the comprehensive development process, a decision that will have positive effects on the lives of citizens and all aspects of economic and social sectors in Sharjah.

Chairman Abdullah Al-Oweis, in the third scheduled meeting of the Board of Directors held at the Chamber's headquarters on Monday, said that the Board was keen to implement His Highness the Ruler’s decision to increase the salaries of the national employees at the Chamber and its affiliated institutions, and he stressed the importance of encouraging national staff to be more productive and consolidate the Chamber's position and strengthen the efforts it makes for the local business community.

Al Oweis added that the financial budget was approved to cover the cost required for this increase, and the Chamber’s budget and its institutions has been reviewed to ensure the implementation of the plans, programs and initiatives adopted recently, in line with the Chamber's general strategic plan 2017-2021 that’s geared towards qualitatively developing services provided by the Chamber for all sectors in the emirate.

The meeting, attended by Sheikh Majid bin Faisal bin Khalid Al Qassimi, First Deputy Chairman of the Board of Directors, HE Walid Abdulrahman Bukhatr, Second Deputy Chairman and Members of the Board, HE Khalid Bin Butti Al Hajri, Director General as well as Director General Assistants, reviewed a number of topics on the agenda and reports on achievements made by institutions operating under the Chamber’s umbrella and the three sectors of the Chamber, for 2017.

HE Khalid Bin Butti Al Hajri, Director General, said that the third meeting of the Chamber's Board of Directors adopted the financial budget for 2018 and the implementation of the operational plan in order to continue the Chamber’s role in the service of the private sector and civil society.

Al Hajri added by saying that the meeting also approved the initiatives aimed at creating events that serve the business community in general to enhance the quality and content of the various services offered by the Chamber to its affiliate members, including electronic and smart services, in order to enhance the competitive environment of the emirate as an investment destination for the industrial sector, the youth entrepreneurial sector and the logistics sector.