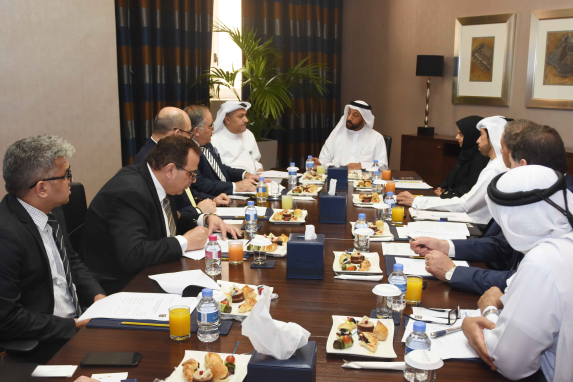 Sharjah Chamber of Commerce and Industry (SCCI) discussed with the new representative committee of the working group of the hotel sector working under its umbrella the reality of the sector and means of developing it and putting in place an action plan to improve the hotel industry in the emirate in order to enhance the tourism sector and  investment.

This came during the first meeting of the representative committee of the hotel sector, formed earlier this year and held at the Chamber's headquarters, headed by Chairman of the Board Abdullah Sultan Al Oweis, in the presence of Nasser Nassif, Chairman of the Representative Committee of the Hotel Industry Working Group, whereby Mamdouh Al Hakim was selected as the Committee’s Deputy Chairman and Mohammad Al Bastaki as its Rapporteur.

Al Oweis started the meeting by welcoming members of the new representative committee of the hotel industry working group, stressing its importance in developing activities and preserving the economic sectors represented by them. He called for ensuring the representation of the largest number of members of these sectors in the working groups, providing advice, and launching initiatives that would serve the sector in particular and developing the emirate's economy in general.

Al Oweis urged the working groups to activate continuous communication and constructive cooperation with the Chamber and representatives of the private business sectors in order to strengthen and support establishments in various economic sectors, study the laws and legislations of interest to the group and provide views and recommendations. He thanked local government directorates for supporting the working groups especially Sharjah Commerce and Tourism Development Authority and Sharjah Municipality, wishing success to all for the benefit of Sharjah and the UAE.

For his part Nasser Nassif, Chairman of the Representative Committee, praised the diverse expertise of the Committee’s members, stressing the need to make the utmost efforts to improve the hotel sector in the emirate in line with the comprehensive development. Mr. Nassif called on members of the committee to be committed to attend the periodic meetings of the committee which will be held at a periodic rate every two months, noting Sharjah Chamber’s support for the Sharjah Hotels Sector and its continual efforts to develop the sector and work to overcome any challenges facing hotel establishments.

During the meeting, it was decided to conduct an analytical study of all  challenges and proposals related to the hotels sector through an electronic questionnaire for the sector's employees to determine the results of this study and to develop an action plan for achieving them.

It was also decided to establish subcommittees to be responsible for following up the work assigned to the group.