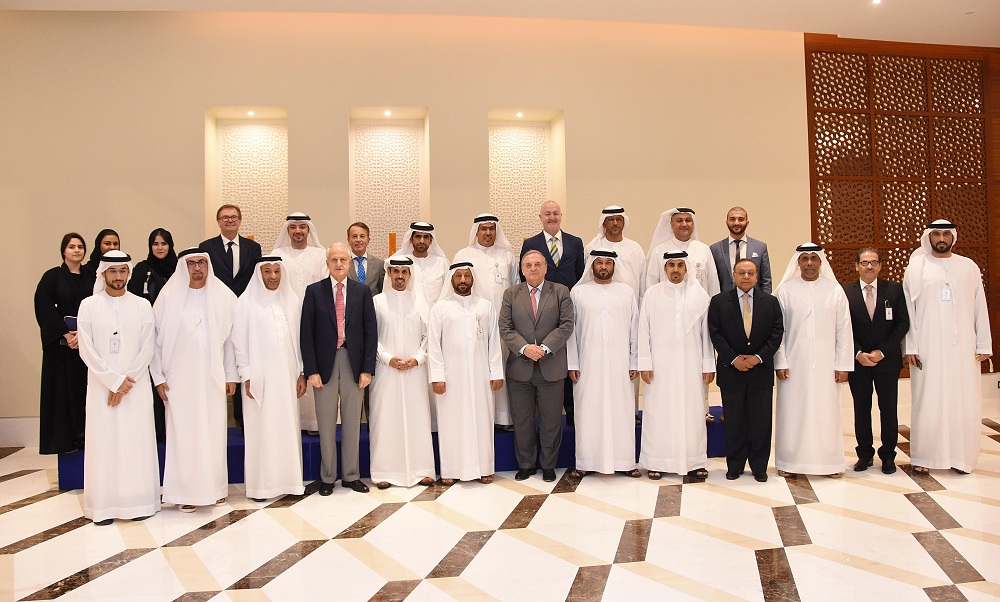 In recognition of its growing role in the international economic arena and its position as one of the leading chambers of commerce in the region, the Sharjah Chamber of Commerce and Industry (SCCI) recently hosted the Executive Committee of the World Chambers Federation (WCF) of the International Chamber of Commerce (ICC) for the first time in its headquarters.

The Committee discussed a number of issues related to the activity of chambers of commerce around the world. The topics included discussing the adoption of recommendations from the previous meeting of the Committee in London, and identifying the upcoming priorities of the federation. Other topics included the review of the eATA Carnet status report, discussion of the WCF Community platform update, discussion of the 2018 Provisional Outreach programme and the 11th World Chambers Congress. Reviewing bids update for the 12 World Chambers Congress, as well as discussing the strategies of the WCF for the African continent and the United States of America were among the many topics discussed that reflect the important role played by WCF in the development of business communities around the world.

In his inaugural address, His Excellency Abdallah Sultan Al Owais, Chairman of Sharjah Chamber of Commerce and Industry, stressed the vital role that the chamber plays in supporting local, regional and international business communities. He also affirmed the commitment of the Sharjah Chamber in promoting global trade and developing the performance of chambers of commerce around the world, while also consolidating the role of the private sector in stimulating sustainable development.

Al Owais added that Sharjah Chamber aims to achieve the economic vision of the Emirate of Sharjah, which is based on economic knowledge. He stated that the vision focuses on promoting innovation and continuous learning, preparing for the fourth industrial revolution in order to achieve high rates of development, and linking the economy in general with cultural and educational sectors, as well as with the exhibition and conference sectors. He stressed that the most prominent example of this wise and ambitious vision is the Sharjah International Book Fair, hosted by the Expo Centre Sharjah annually, which is considered an outstanding cultural exhibition and a major economic event at the same time.

He also added that the Chamber seeks to translate the vision of the Emirate through the development of modern business plans and programs as part of an ambitious strategy to harness benefit from potential opportunities in international markets. He gave the Chamber's efforts to develop trade relations with African countries as an example, which have the advantages and benefits of having broad investment opportunities, and which is in line with international efforts to develop the continent.

Al Owais expressed the Sharjah chamber’s unlimited support for the Dubai Chamber of Commerce and Industry’s bid to host the 12th World Chambers Congress in 2021. He stressed that Dubai Chamber's success in hosting this important event, which brings together more than 12,000 chambers of commerce from around the world, would be a success for the UAE, in that it will further consolidate the country’s position on the global economic map as a regional and global economic center.

Al Owais also praised the close relationship between the Sharjah Chamber and its counterparts around the world through the strategic partnership with the WCF. He appreciated the role of the Federation in spreading the concepts of sustainable development through the launch of many initiatives that support the development, advancement and progress of business communities, and linking them to many productive and service-oriented outputs.

HE Hamad Buamim, President and CEO of the Dubai Chamber of Commerce and Industry stated that the meeting of the executive committee of the world Chambers Federation in the UAE is very important for the country's effective contribution to the promotion and development of the global economy. He pointed out that the UAE and its various chambers of commerce occupy a high and advanced position among their counterparts around the world and have made diverse contributions and initiatives that have made the country’s business community one of the best in the world.

Buamim pointed out the importance of the World Chambers Federation to the Chamber, which is a platform to strengthen cooperation between Chambers of Commerce around the world and activate its role in serving the global business community. He also praised the role that Dubai Chamber played in communicating the voices of chambers of commerce in the region to the decision makers in the World Chambers Federation, emphasizing the importance of these meetings that help develop the general policies of the federation which facilitates trade and economic activities and  advance the performances of the chambers in accordance with the best international standards

HE Peter Mihok, Chairman of World Chambers Federation, thanked Sharjah Chamber for hosting the meeting and praised its role played within the Federation and its constructive contribution in supporting its efforts as well as promoting partnerships between Chambers around the world and private sector. He also praised Sharjah Chamber for participating in the activities of the last five sessions of the World Chambers Congress and its growing contribution  to promoting the role of small and medium enterprises in supporting the global economy.

World Chambers Federation of the International Chamber of Commerce  is the ideal platform for global chambers to communicate, share experiences and showcase their best practices to facilitate economic activities and stimulate global trade. It is also a platform to help chambers support small and medium enterprises. The Federation also contributes to building mutual relations between the different chambers and assist them in opening passages for joint cooperation to serve their members, in addition to helping the Chambers improve their performances by providing them with advice in different fields. The Federation has a membership of 12,000 global chambers.