New Sharjah Chamber Board of Directors Holds Its First Meeting 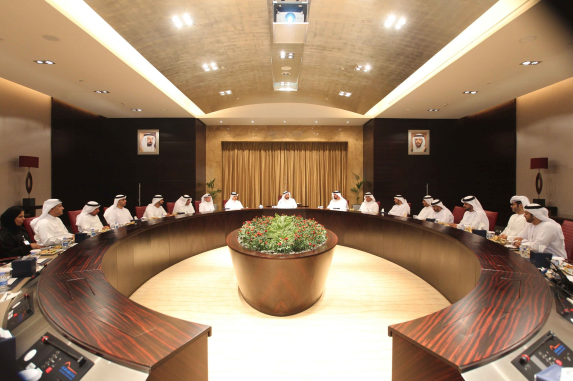 Sharjah Chamber of Commerce and Industry’s board of directors, recently reorganized in accordance with an Emiri decree issued by His Highness Dr. Sheikh Sultan bin Mohammad Al Qassimi, Member of the Supreme Council and Ruler of Sharjah, held the first meeting of its 16th edition.

The meeting, held at Sharjah Chamber’s headquarters and chaired by HE Abdullah Sultan Al Oweis, Chairman of the Board, was attended by members of the board and witnessed selecting Sheikh Majid bin Faisal bin Khaled Al Qassimi as first deputy of the chairman and HE Waleed Abdulrahman Bu Khatir as second deputy of the chairman, and HE Ziad Mahmoud Khairallah Al Hiji as an honorary secretary of the fund.

Al Oweis opened the meeting by expressing his gratitude and appreciation for HH Dr. Sheikh Sultan bin Mohammad Al Qassimi, Member of the Supreme Council and Ruler of Sharjah, for renewing his trust in the board to hold responsibility and continue Sharjah Chamber’s journey through the next phase, which reflects Sharjah Ruler’s keenness and unlimited support for the Chamber to serve the business community and highlights the strategic partnership with the private sector in order to promote the comprehensive and sustainable developmental journey.

Al Oweis stressed the importance of redoubling efforts to provide all possible means to enhance cooperation and coordination with the local government departments with the continual follow-up and direct support of His Highness Sheikh Sultan bin Mohammed bin Sultan Al Qassimi, Crown Prince and Deputy Ruler of Sharjah to implement the five-year strategic plan for Sharjah Chamber (2017-2021) and achieve its objectives on all levels.

Al Oweis pointed out that achieving the qualitative shift must be made by the Chamber to achieve its desired performance, services and activities and the added value it provides the business community with, thus enhancing the economic environment of the emirate and encouraging investors to launch quality development projects based on knowledge and innovation, and establish the best relations with countries around the world; he called upon the Chamber to join efforts and continue working as one team to achieve its vision and mission and raise it stature as an economic hub.

The meeting, attended by Mohammed Ahmed Amin, Assistant Director General for the Communications and Business Sector, and Mariam Saif Al Shamsi, Assistant Director General for the Support Services Sector, discussed a number of key topics related to the board's working mechanisms and establishing the specialized and permanent committees and affiliate corporations that work under the Chamber’s umbrella, forming the Executive Office of the Board of Directors and adding 3 new members in addition to 2 deputy chairmen and honorary secretary of the fund.

Also, Sharjah Expo Centre’s board of directors was formed, members of the executive council of Sharjah International Commercial Arbitration Centre were selected in addition to board members of the Trustee Council of the Sharjah Award for Economic Excellence (shj.Seen) and the permanent committees that represent the key economic sectors as well as the eastern province committee.